Recently there has been reported cases of daith piercings reducing migraine headaches at Elite Ink Tattoo Studios.  A substantial amount of clients have experienced this magical healing procedure.

A Daith piercing is an ear piercing that passes through the ear’s innermost cartilage fold, the crus of the helix. In most areas this piercing is pronounced “day-th” although the proper pronunciation is “doth” (rhymes with “moth”). 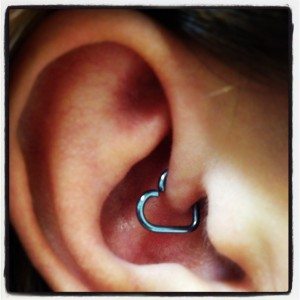 The theory that daith piercings help ease migraines is based on the idea that it is the same pressure point as that targeted by acupuncturists to relieve chronic headaches Acupuncture, a therapy which began in China more than 2,000 years ago, involves placing fine needles at specific pressure points on the body’s surface. The needles are then manipulated by a acupuncturist, either manually or electrically.
It causes the blood vessels around the needle to open up and become wider, allowing for an increase in blood flow to the tissues in the immediate area. A report published in 2012 in the Archives of Internal Medicine analysed nearly 18,000 patients and doctors from eight universities and hospitals in the UK, US and Germany. The results showed in conditions including chronic headache, acupuncture was twice as effective as the drugs and exercise recommended by most doctors.

The Migraine Relief Center recognizes the link between ‘daith’ piercings and easing migraine symptoms.‘The principle is that the piercing mimics acupuncture by hitting a pressure point, which relieves the pressure in the patient’s head,’ a blog on the website states.
‘By having it done on the same side as most migraines occur, it’s thought to help reduce the incidence of migraines in the area.’ But, it cautions: ‘At this point, the effect of daith piercings on migraine has not been officially studied so it’s difficult to determine whether there’s any truth to the claims or not.’

If you already enjoy piercings and are experiencing migraines than a Daith piercing may be in store for you. Seek out a reputable company such as Elite Ink Tattoo Studios in Center Line, Dearborn Heights, or Warren.  Elite Ink has state of the art studios that are kept up to date with proven methods to make the daith piercing a comfortable and successful experience.

Posted in:
Tagged with: